Ari Redbord has spent his career helping to catch criminals through their money. Today, as Head of Legal and Government Affairs at TRM Labs, he works with law enforcement globally, who use TRM as a tracing tool, watching how money moves through the blockchain's open ledgers to help build investigations into wrongdoing. Redbord's U.S. government background was the perfect setup for his current role, giving him the desire and hustle mentality to make it happen.

Redbord worked as a prosecutor in the U.S. Department of Justice for 11 years at the intersection of money laundering and national security: cash smuggling, high-value artwork, shell companies, and Russian real estate all crossed his desk. "I prosecuted cases involving terrorist financing, sanctions, antiquities smuggling—what we call 'threat financing.'"

But Redbord's urge to work against bad actors exploiting the financial system came even earlier in his career. "I clerked for a federal judge and watched prosecutors in court representing the government," he says. "It's something that really appealed to me."

This drive to work towards justice led his DoJ colleagues to give him the nickname "Young, Scrappy and Hungry": a reference to the musical Hamilton (it helped that Redbord is a huge musical theater fan, and perhaps even sees a little of himself in this story of the well-intentioned revolutionaries hatching a revolution, with a new financial system). Now, even in the startup world, he works on the other side of the equation but with the same focus on combating money laundering that he has always had: "I essentially found a startup that is really on that same mission." 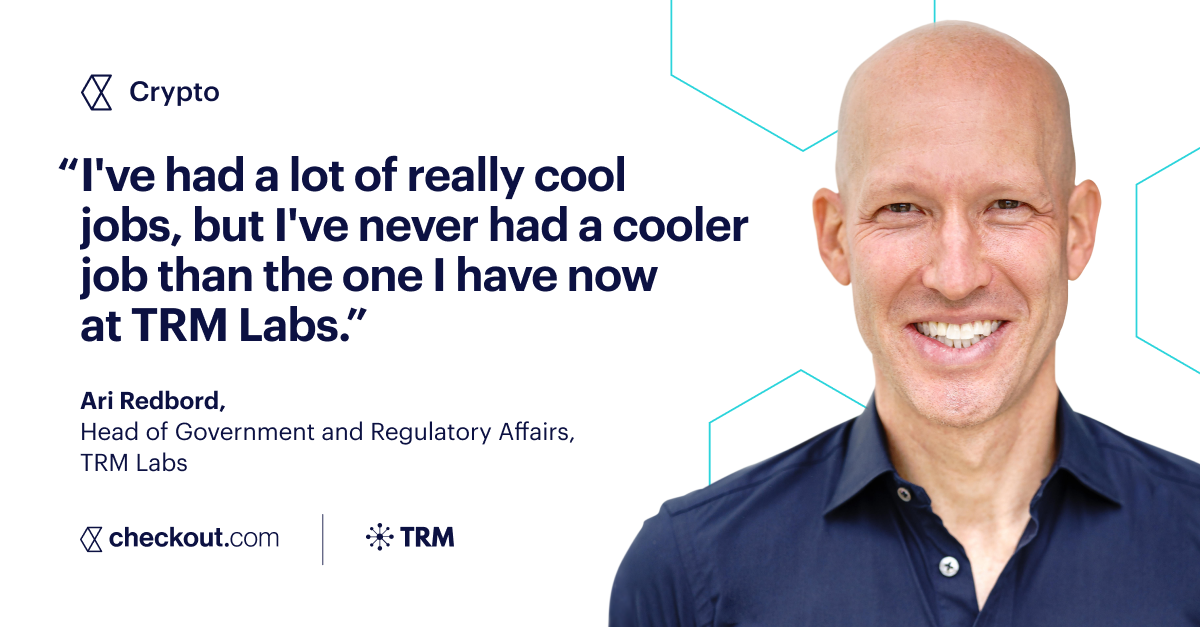 Redbord, who was always committed to doing whatever it took to make a difference, felt right at home in the hustle mindset of the startup culture he joined. Working globally with regulators, who use the software as a forensic tracing tool to help build investigations, TRM Labs is solving a growing issue, and is currently scaling up to match that demand. "When I joined, not even two years ago, TRM employed about nine people. Today, we're about 130 people across 15 countries."

He sees his input into building this team as one of his greatest achievements outside of his family: "We have brought in some of the greatest crypto investigators from across former law enforcement," he says, alongside a sales team of "true subject matter experts" and "extraordinary lawyers." TRM's mission-based approach is key to creating that team: "These people have spent their careers on a mission to essentially protect the financial system," he says.

He also credits this exciting atmosphere to the community of people currently working in crypto: "People that are thinking about these types of issues and building a new, safer financial system have just been extraordinary people and are very supportive of each other, even when you're in competing businesses," he says, noting the importance of being open to this group when working in crypto. "You have to embrace the community of builders and innovators."

Redbord's history of prosecution within the government has given him a deep understanding of the myriad ways that criminals use crypto, and how these tools could actually benefit governments. While working at the Treasury as senior advisor to the Under Secretary for Terrorism and Financial Intelligence, he helped to oversee the national security apparatus of the U.S. Treasury department.

It was when digital currencies suddenly began to take over headlines. "I was at the Treasury right around the time Libra launched," he says, referring to Facebook's now-defunct virtual currency. This was a lightning rod for regulators globally (how do you deal with hundreds of millions of users being able to send payments internationally and instantly, overnight?).

But the money laundering and compliance issues that Libra sparked were less of a surprise to Redbord, who had previously worked on cryptocurrency cases involving North Korea. "The North Korean regime was an early adopter of cryptocurrency for nefarious activity," Redbord explains. "They understood there was an opportunity with this nascent technology to launder funds."

Now in 2022, so much has changed for those working with crypto, not least that there are many more users. The scale of blockchain technologies, like stablecoins, has accelerated the conversations around regulation and trust, making TRM's work so crucial.

"It's been an incredible year to 18 months in crypto," says Redbord. "Aside from what's happened in the markets, it's also been the first time a U.S. President has talked openly about cryptocurrency and issued an Executive Order. That's pretty extraordinary."

Redbord notes this activity isn't just happening in the US. Regulators globally are striving to create comprehensive legal frameworks for digital assets. "This isn't a reaction to the market events (although it probably puts what's happening further into the spotlight). It's something that regulators have worked on for a long time. And it's essential work because there is a universal understanding that the crypto ecosystem needs to be safe and trusted to onboard the next billion users. And that's key to what we're doing at TRM Labs."

This is not a moment. It's a movement

When he's not chasing down the bank details of cyber criminals, Redbord can often be found running—he has 26 marathons under his belt (and counting). His favorite city to run in? London, with its riverside paths along the House of Parliament and the Thames, plus, as a musical theater fan, the West End holds a unique charm, he says.

He's also a keen fan of basketball, and, as you might expect from a crypto leader, loves to dabble in NBA Top Shot. He opens the packs with his two sons online, and they all cross their fingers for LeBron James or Steph Curry. "I think what's so cool is like NBA Top Shot, Bored Apes, Cryptopunks—these are our first use cases for this technology," he says. Ultimately, his conviction in crypto's transformative potential is his passion.

"I've had a lot of really cool jobs, but I've never had a cooler job than the one I have now at TRM Labs," he concludes.